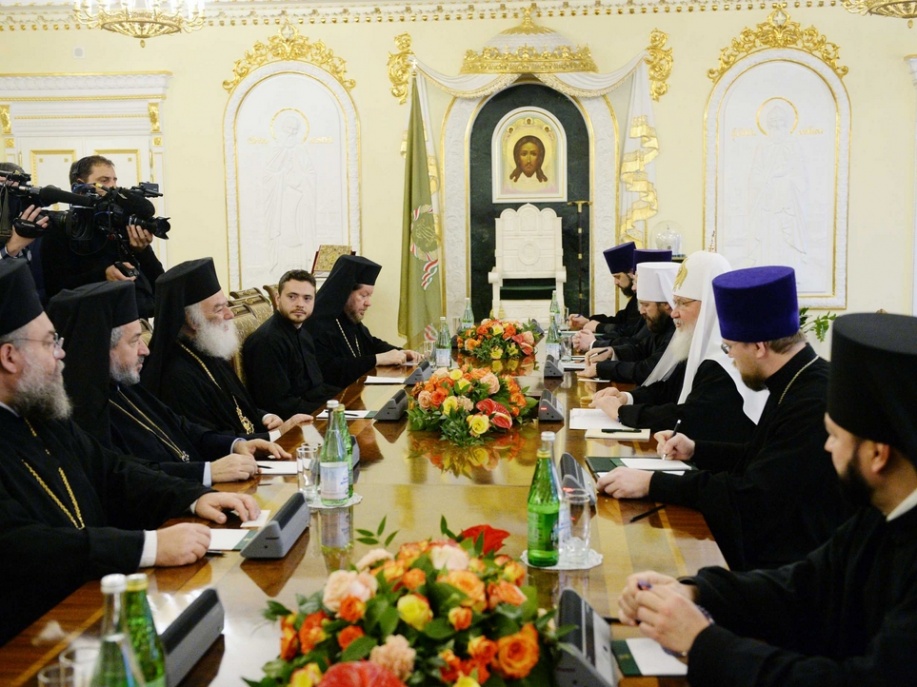 Attending the meeting on the part of the Russian Orthodox Church were Metropolitan Hilarion of Volokolamsk, chairman of the Moscow Patriarchate’s Department for External Church Relations (DECR); Archbishop Leonid of Vladikavkaz and Alania; archpriest Nikolai Balashov, DECR deputy chairman; archpriest Igor Yakimchuk, DECR secretary for inter-Orthodox relations; and Rev. Viktor Kulaga, representative of the Patriarch of Moscow and All Russia to the Patriarch of Alexandria and All Africa.

The Primates of the Orthodox Churches of Alexandria and Russia prayed at the domestic church consecrated in honour of all saints of the Russian Church.

His Holiness Kirill addressed the high guest saying: “Your Beatitude, it is a special joy to meet You in the spiritual and administrative centre of the Russian Orthodox Church at St. Daniel’s monastery. At the domestic church here we nominate new bishops and meet the heads of the Local Orthodox Churches with doxology. Today, after a short prayer service we prayed for You, Your Beatitude, for your bishops and your faithful. We highly appreciate your labours. You are performing your patriarchal ministry with patience, generosity and love in difficult conditions. Historically, you care for the north of Africa – Egypt, but God has willed that missionary work among the African people would also need your energy and wisdom. We thank You for Your work aimed at the strengthening of the Orthodox faith of the African tribes.”

The Primate of the Russian Church also noted with gratitude an important part played by His Beatitude Patriarch Theodore II in the pan-Orthodox family: “…Thanks to your good character and loving heart you find correct words to comfort people and to support and strengthen peaceful fraternal relations with the Primates of the Churches even in difficult situations.”

His Holiness expressed his joy over that fact that the Primate of the Orthodox Church of Alexandria officiated at the historical divine service celebrated at the Cathedral of Christ the Saviour on December 4 in commemoration of the centenary of the restoration of Patriarchate in the Russian Church. St. Tikhon was enthroned on the feast day of the Entrance into the Temple of the Birth-giver of God, and may the Lord strengthen you and your flock in the apostolic ministry to which He has called you.”

His Beatitude Patriarch Theodoros expressed profound gratitude to the Russian Orthodox Church on behalf the fraternal Church of Alexandria and recalled his ministry at the metochion in Odessa and his visit to Moscow at the time when St.Daniel’s monastery was only coming to life.

Patriarch of Alexandria called his participation together with brothers fr om other Orthodox Churches in the festivities marking the centenary of the Local Council and election of Patriarch Tikhon a great blessing and thanked the Moscow Patriarchate for its aid to the Orthodox Christians in Alexandria.

The main topic of the talks was the situation of persecuted Christians in the Middle East and North Africa. People learn fr om the mass media about horrific terror attacks in Syria, Iraq, Egypt and Libya, but terrible events in other countries on the African continent are sometimes forgotten, such as over nine hundred Christians killed in Nigeria or persecution and execution of Christians in Tanzania, Sudan, Somalia and the Central African Republic.

‘We understand the difficulties of your archpastoral ministry under these circumstances,” His Holiness Patriarch Kirill said. He assured the high guest in support and willingness to cooperate and asked him for information of the cases of attacks against Christians so that the Russian Church could also spread this information throughout the world because as many people as possible must know that Christians are the most persecuted religious group in the world in the 21st century,” the Primate of the Russian Church underscored and reminded his audience that she had not stopped talking about the persecution of Christians in different regions of the world during last decade at the UN, the World Council of Churches and other organizations, but often heard that not only Christians were suffering. Patriarch Kirill believes that an important part in the change in attitude to the tragic situation of Christians in different countries of the world was played by his meeting with Pope Frances.

“You are performing your missionary ministry in difficult conditions. It is filled with God’s grace, but it runs human risks. We wholeheartedly wish you God’s aid and are willing to hold your hands with the staff of a missionary and preacher travelling all over the continent of Africa,” His Holiness told His Beatitude.

The Primate of the Orthodox Church of Alexandria said that he was leaving Moscow with the renewed strength after experiencing the joy of praying at the Divine Liturgy and our talks.

He explained the difficult situation in which Christians live and minister and added that the Muslims of the region fell great injustice as their name is denigrated being linked with the notion of terror. Patriarch Theodoros spoke about great pain of the inhabitants of Egypt, Christians and Muslims alike, which they felt over 320 victims of the terror attack in Bir-al-Abed in the north of the Sinai Peninsula known for Mount Sinai wh ere the Lord appeared to Moses. “There is Saint Catherine monastery there which has given an example of love among representatives of the two religions for many centuries… Our hearts are filled with anxiety, and we hope that the Lord will give heed to our prayers.”

Patriarch of Alexandria informed of the recent bombing of an Orthodox church in Benghazi, Libya, and added that Metropolitan Meletios of Carthage takes spiritual care for this region of North Africa with the territories of Morocco, Tunisia, Mauritania, Algeria and Libya.

He is convinced that oil and weapons cause the conflicts. “We are confronted with new situations, and unexpected transformation of the existing order. Our Church is trying to do anything she can for people living in fifty-four countries in our jurisdiction,” said Patriarch Theodoros and mentioned the Church’s aid to the refugees in Sudan wh ere they have fled from Syria. “There are many Christians among them,” he added.

His Beatitude also spoke about the challenges and problems in the life of the Patriarchate of Alexandria and continued to say: “I foresee a day when Orthodoxy on the continent of Africa will become very strong. My life in Africa has taught me to look ahead, and I always ask the Lord to bless our work.” 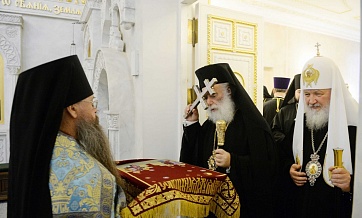 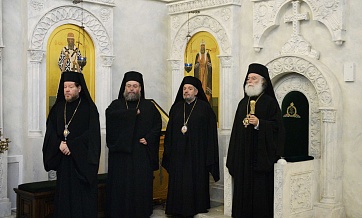 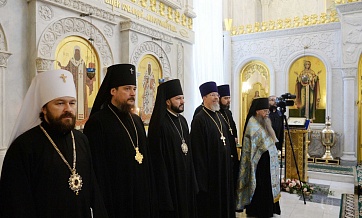 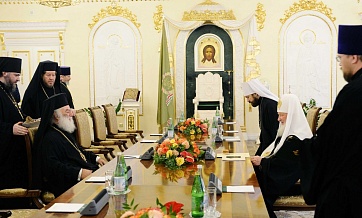 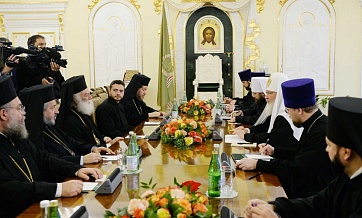 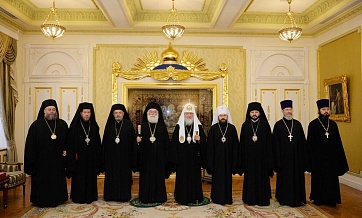 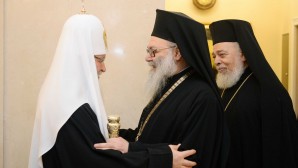 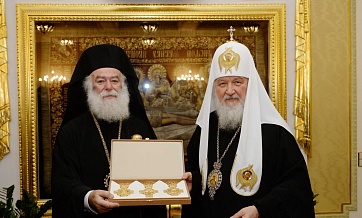