On commemoration day of St. Catherine, Metropolitan Hilarion of Volokolamsk officiated at the Church of St. Catherine the Great Martyr In-the-Fields the representation of the Orthodox Church in America

On commemoration day of St. Catherine, Metropolitan Hilarion of Volokolamsk officiated at the Church of St. Catherine the Great Martyr In-the-Fields the representation of the Orthodox Church in America 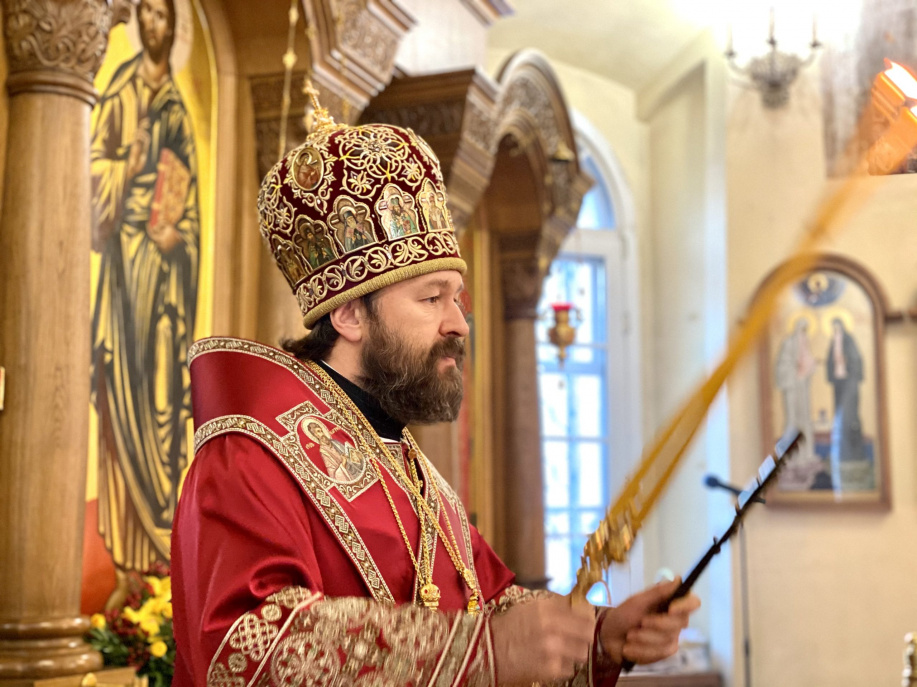 On December 7, 2020, the commemoration day of St. Catherine the Great Martyr, Metropolitan Hilarion of Volokolamsk, head of the Moscow Patriarchate Department for External Church Relations, officiated at the festive service at the Moscow representation of the Orthodox Church in America – the Church of St. Catherine In-the-Fields.

After the Prayer of Fervent Supplication, Metropolitan Hilarion lifted up a prayer read at a time of the spread of a pernicious infection.

After the liturgy, Archpriest Daniel Andreyuk greeted Metropolitan Hilarion and thanked his concelebrants for their prayers and read out the message of greetings from His Beatitude Tikhon, Metropolitan of All America and Canada.

“A year ago we marked together a feast timing it to the 25th anniversary of the representation church of the Orthodox Church in America in Moscow. At the time of our joyful celebration, no one of us knew what hardships the coming 2020 year would bring to us. Indeed, it has been a hard year filled with sorrow and confusion. But we are inspired by the example of martyrs who had to overcome great trials in their lives. They endured starvation and betrayal, torture and loneliness – all for the sake of the truth. They did not fear the universal evil and put their trust in Christ Who said to us, ‘In the world ye shall have tribulation: but be of good cheer; I have overcome the world’ (Jn.16:33)”, His Beatitude stated in particular.

Asserting that St. Catherine the Great Martyr showed an example of courage and found a great power in the Saviour’s promise, His Beatitude called to follow her example and always trust the Lord despite all the problems and hardships in today’s world.

On behalf of the clergy and parishioners of the St. Catherine Church, Archpriest Daniel presented Metropolitan Hilarion with an icon of Christ the Saviour. “May this image serve you as a reminder of our feast and give you strength”, he said to His Eminence.

In his archpastoral homily, chairman of the Department for External Church Relations Metropolitan Hilarion of Volokolamsk said:

“Your Eminence, dear Bishop Anthony, representative of the Serbian Orthodox Church at the Moscow Patriarchal see,

Very Reverend Father Daniel, representative of the Orthodox Church in America to the Patriarchate of Moscow and All Russia,

I cordially congratulate all of you on the feast of St. Catherine the Great Martyr and convey to you a blessing and greeting from His Holiness Patriarch Kirill of Moscow and All Russia.

Indeed, as His Beatitude Tikhon, Archbishop of Washington, Metropolitan of All America and Canada, has reminded us, the year 2020 has be hard for all of us. For it has been marked with a world pandemic, which is not weakening to this day. Each day we see how the number of the infected and dying is growing. Throughout this time, we have been ardently praying to our Lord Jesus Christ, the Most Holy Mother of God and all the saints we venerate, so that this misfortune may pass quicker, that the lives of our loved ones may be preserved and we could return to the way of life we are accustomed to, acting without regard for numerous restrictions existing today; above all, that we could freely pray in our churches, partake of the holy communion and become united with the Lord in spirit and body.

Unfortunately, not all have this possibility at present. Some people, especially elderly, and those who suffer from various illnesses, are recommended to stay at home, within the confines of their flats. Of course, this difficult situation compels us to pray fervently for a quicker end of all this.

It is sufficient to look at the history of the emergence of Local Orthodox Churches to see that this ridiculous theory propagated to and imposed on Local Orthodox Churches today has nothing to do with reality. Neither the Church of Alexandria, nor that of Antioch, not that of Jerusalem, nor that of Georgia received their autocephaly from the Patriarchate of Constantinople – they had become autocephalous prior to the Church of Constantinople.

I do remember how, being a 16 year-old boy, I was present at the festivities in Tbilisi on the 1500th anniversary of the autocephaly of the Georgian Orthodox Church. Therefore, when we are told now that the Patriarch of Constantinople alone has certain special rights and privileges allegedly granted him by Ecumenical Councils, we do not believe in these fairy tales and fables.

The representation of the Orthodox Church in America, which has existed in Moscow for long years, is a liaison between our two sister Churches. I hold this church especially dear because, as you know, I used to serve in it as a priest for several years under one of your predecessor, dear Father Rector, whose name is also Daniel, and he, as I know, is still in good health despite his very old age. We always remember Father Daniel and his wife in our prayers.

I would like to wish God’s help to you, Reverend Father Daniel, the clergy and parishioners of this church. May the intercession of the Most Holy Mother of God defend us; may Her honourable veil protect us from every evil. May the Lord, through the intercession of Great Martyr Catherine, whose memory we brightly celebrate today, help us in our life journey.

During this Nativity Fast, let us prepare ourselves by prayer and participation in the Divine Liturgy for the meeting with the Divine Enfant Christ Who was born in Bethlehem. May the Lord preserve us for many good years.

Happy holiday! May the Lord preserve all of you!” 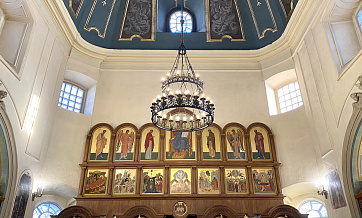 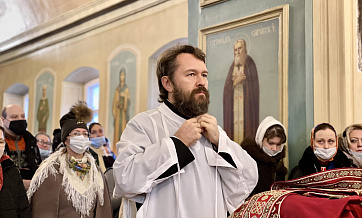 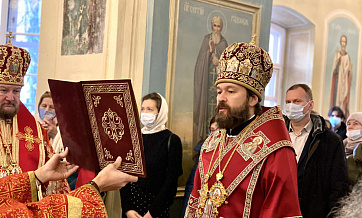 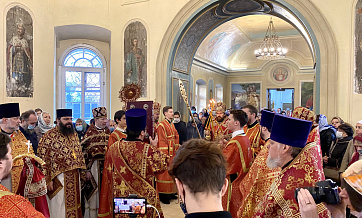 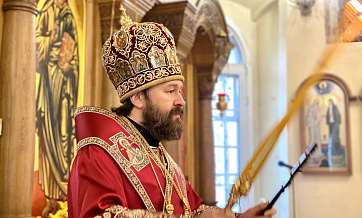 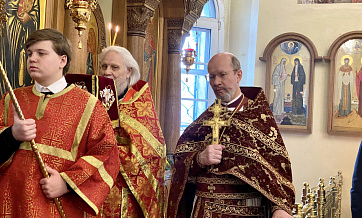 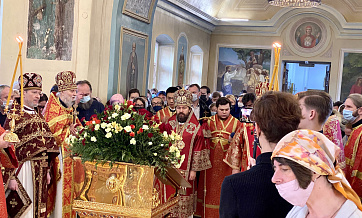 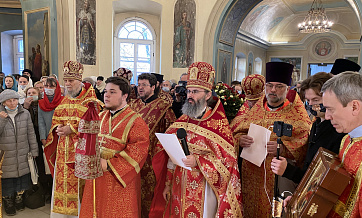 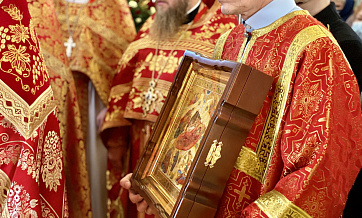 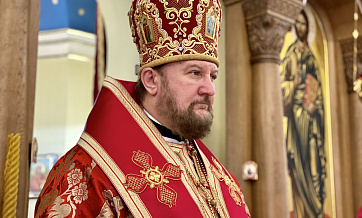 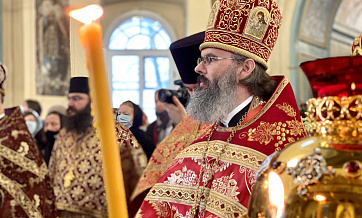 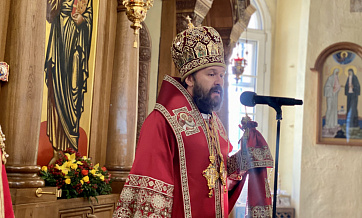