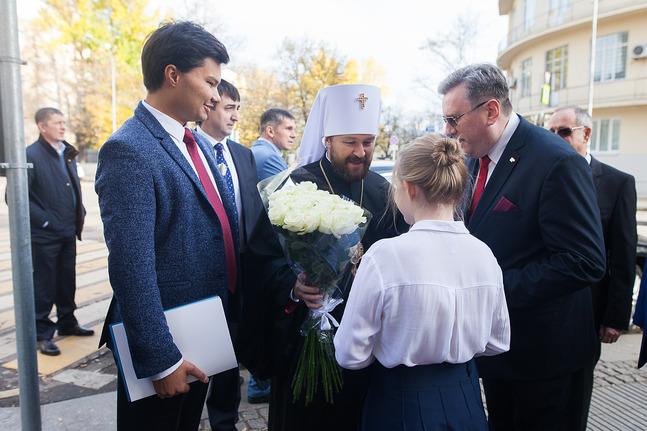 On October 19, 2017, the National Day of the Lyceum Student, Metropolitan Hilarion of Volokolamsk, head of the Moscow Patriarchate department for external church relations DECR) and rector of the Ss Cyril and Methodius Institute of Post-Graduate Studies (CMI), visited Moscow State Pedagogical University (MSPU).
The archpastor was welcomed at the MSPU central entrance by representatives of the administration, professors and students led by Rector A. Lubkov. His Eminence took part in the solemn openings of the Choir Festival. The mixed choir of the MSPU Institute of Arts students and the chamber orchestra of the Cantus Firmus university performed excerpts fr om Metropolitan Hilarion’s ‘Passions of St. Matthews’ and ‘Stabat Mater’ and compositions by Mozart, Rachmaninov and Tchaikovsky.

The recital was followed by Metropolitan Hilarion’s meeting with faculty and students. His Eminence stressed that in training educators, who are to be broadly erudite and well-educated people, it is important that innovative technologies should be aimed at the formation of the human personality: ‘It is impossible to imagine pedagogy without a synthesis of education, training and formation and, most importantly, without the figure of the teacher. The teacher should have not only the pedagogical gift to convey curricular knowledge on the most up-to-date level, but should also engage in the formation of students.

‘The vocation of priest and teacher are close in many ways; they have common tasks. It is not accidental that the Church and school have always complemented each other’, the CMI rector said. He noted that the notion of ‘pedagogics’ occupied a weighty place in the biblical texts and works of Christian authors, ‘Old Testament prophets had students and even whole schools. However, the prophetic gift, the personal charisma could not be handed down through mere training or by way of conveying information, or, what is called today ‘providing educational services’. Great prophets has a spiritual succession, and no prophet could communicate his talents to another automatically, as it were, hereditably, since the prophetic gift fr om a teacher to a student was an act of God’s will… The 2nd-3d century Christian author Clemet of Alexandria points out that many teachers seek to train students for various skills and knowledge but the ‘insight of the Truth’ can only result from the pedagogic consonant with the will of God. For this reason, speaking about pedagogy, Clement means not just an abstract teacher. Standing before his eyes is the bright image of Jesus Christ – the Pedagogue with capital P.  I do not doubt that many of you have read the Gospel. For some it is surely a handbook, a guide to action. For others, it is simply an interesting literary monument. But I would like today to express a wish that each of you, who have chosen pedagogy as your vocation, should read the Gospel as a professional and look at the image of Christ precisely from this perspective: what a modern educator can learn from Him. Jesus had a very interesting, original and unique method of teaching. For instance, He never lowered the bar in an attempt to fit in with the spiritual and intellectual level of His interlocutors, as many teachers tend to do. Read His talk with Nicodemus in Chapter 3 of the Gospel of St. John or His talk with a Samaritan woman in Chapter 4 of the same Gospel, and you will see that the talk in both cases is conducted as it were on two different levels: Jesus speaks on one level while the interlocutor asks questions on a different one. Jesus as if leads the interlocutor, raising him higher and higher and teaching him to see spiritual realities behind earthly things’.

Metropolitan Hilarion drew his listeners’ attention to one of the characteristic features of the pedagogical experience of Jesus Christ – the genre of parable: ‘In human history, there was no other teacher who could use the genre of parable so broadly and consistently as Jesus did. Having inherited this genre from the Old Testament, He broadened its resources to such an extent and the art of parable to such perfection that no one of His followers, either in the first or in other generations, did not dare to resort to the genre of parable’. Jesus’ use of parables as a basic form of communicating spiritual and moral truths was also noted by the evangelists: “Jesus told them another parable” (Mk. 13:24); “With many similar parables Jesus spoke the word to them, as much as they could understand. He did not say anything to them without using a parable” (Mk. 4:33-34).

His Eminence noted that the Saviour can be described as a true pedagogue not only because He chose teaching as his primary task but also because He created around Himself a community of disciples: ‘Jesus begins His public ministry with calling disciples: “As Jesus walked beside the Sea of Galilee, he saw Simon and his brother Andrew casting a net into the lake, for they were fishermen. “Come, follow me,” Jesus said, “and I will send you out to fish for people. «At once they left their nets and followed him. When he had gone a little farther, he saw James son of Zebedee and his brother John in a boat, preparing their nets. Without delay he called them, and they left their father Zebedee in the boat with the hired men and followed him” (Mk. 1:16-20; Mt. 4:18-22). And the theme of Jesus’ relationships with His disciples is one of the central in all the four Gospels. And a considerable part of His admonitions reproduced in the Gospels are addressed to the disciples. Jesus talks with them in private; He addresses them separately before He addresses the people; at their request He explains what they did not understand in His admonitions addressed to the people”.

The CMI rector also touched upon the question of the relationships between religion and education throughout history. He mentioned philosophical teachings, which sought to construct ‘a religion within the reason alone’ and to lead people away from faith, to substitute its truths for abstract reasoning and a secular morality based on it. ‘The next step was the complete rejection of the religious component of educational process, the attempt to build education on the atheistic basis. This attempt was made in our country in the Soviet time. Concurrently in the West there was a gradual process of atheization of the whole education system, which at present seems to be close to completion. Certainly, there are departments of theology preserved in western universities, and theology is traditionally placed at the highest place in the list of disciplines. But the idea of a living link between religious experience and educational process is not simply lost but is consciously and consistently demounted’.

According to the hierarch, this long process of the emancipation of education from religion has resulted in education turning into one of the spheres of services, ‘This metamorphose completely devalues education, depriving it of the most important thing which is its formational component’.

In conclusion of his address, Metropolitan Hilarion said that today’s shortage of values brings a thinking person back to the truths of religion, ‘It is not accidental that in our homeland theology is coming back to its lawful place in the humanities and education. It is very important since living in Russia are diverse peoples and diverse faiths. But what is needed today is that theology and pedagogy should be able to unite efforts. I am very glad that in the walls of the MSPU a chair of theology exists and successfully develops’.

His Eminence expressed the conviction that systematic theological education should be complemented with pedagogical capacities, and pedagogical skills should be combined with if not religious experience but at least with good knowledge of religious doctrines and traditions.

‘Today I am often asked wh ere theological graduates will go to and wh ere there is a demand for them. First, they will be demanded at higher educational institutions as teachers since the role played by the religious factor in people’s life is not diminishing but, in the contrary, it is obviously growing. It means that in demand are those who can interpret this factor properly, communicating the student youth the knowledge of religion. Secondly, theological graduates should become those who teach Basic Religious Cultures in schools. It is no secret for anyone that today this subject, which has been introduces in school education only recently, is sometimes taught by people who are little competent in the religious sphere as they were educated in completely different areas. The creation of conditions for children and youth to receive high-quality knowledge about religious traditions, in my view, should become one of the priorities in the state education policy… Today the religious card is actively played by terrorists who recruit children and youth to their criminal organizations. Ignorance in religious matters is the soil on which the terrorist ideology germinates. If we do not want our children to come under the ideological influence of servants of Satan, who use the name of Allah to cover their inhuman actions, we should immunize them from the very childhood against such ideology in the form of sound knowledge of traditional religious confessions and their teachings’, the hierarch concluded.

Prof. A. Lubkov thanked His Eminence, noting, ‘Always and in all times we have assigned primary importance to the formation of the teacher and the student as the image and likeness of God. As far back as the turn of the 20th century, a profound religious-philosophical tradition was laid in the foundation of our university. I speak of Vladimir Solovyev. And in the 20th century this tradition was continued by Aleksey Losev, a great Russian scholar, philologist, philosopher and educator, who taught in here at the Department of Philology for 44 years. I believe our common attitudes open up broad opportunities for cooperation’.

Metropolitan Hilarion and Prof. A. Lubkov signed a Cooperation Agreement between the CMI and the MSPU.

His Eminence presented the MSPU library with a copy of his six-volume book ‘Jesus Christ. Life and Teaching’.

After the meeting Metropolitan Hilarion visited the MSPU Chair of Theology and had a talk with professors and students. He also saw the university’s picture gallery and exhibits of the exposition ‘Sources’ devoted to the history of the university. 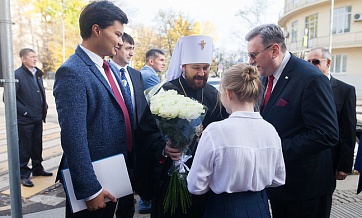 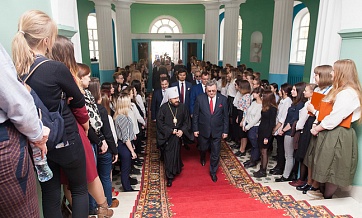 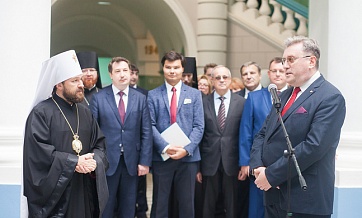 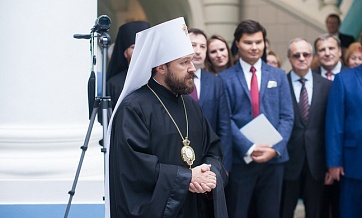 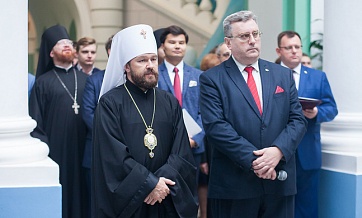 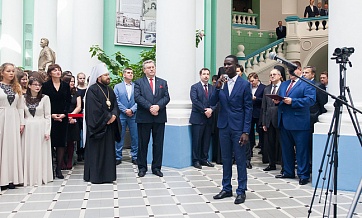 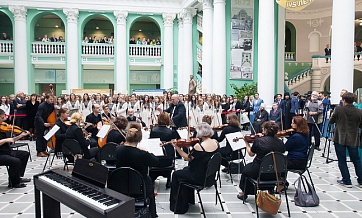 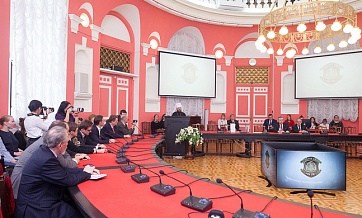 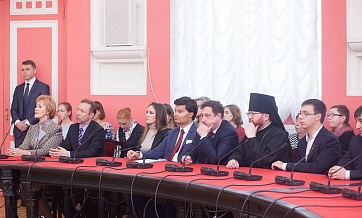 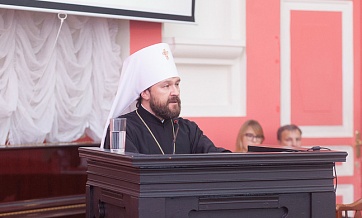 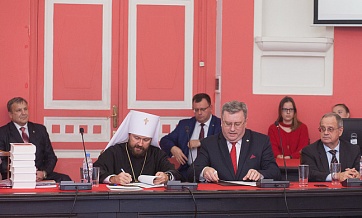 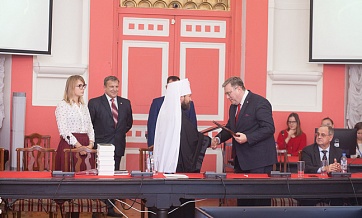 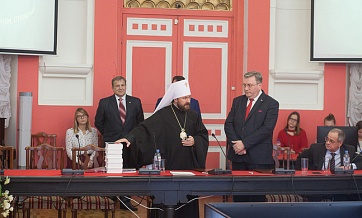 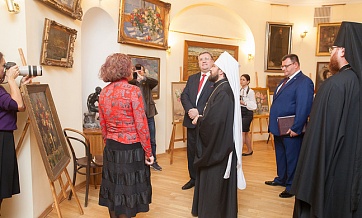 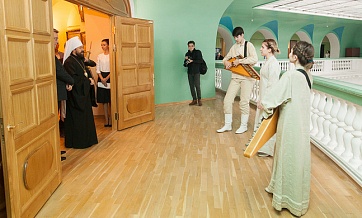 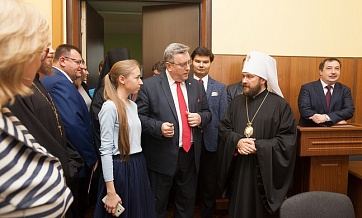