June 2, 2015 – With the blessing of His Holiness Patriarch Kirill of Moscow and All Russia, Advanced Courses for heads of diocesan departments for cooperation with the Cossacks were launched at the Ss Cyril and Methodius Institute of Post-Graduate Studies (CMI) in Moscow.

The students, who came from 36 dioceses, were welcomed by Metropolitan Hilarion of Volokolamsk, CMI rector and head of the Moscow Patriarchate department for external church relations (DECR).

His Eminence explained that Patriarch Kirill set the CMI the task to elaborate a program that could help people already invested with a high church rank to improve their knowledge in various areas on a regular basis. ‘It requires from us that we should be competent not only in the areas we studied in a theological school but that we should also know laws and the functioning of the financial system. We should keep abreast of social processes taking place inside and outside our homeland. We should understand why a particular phenomenon happens in the political life because, firstly, this is what our parishioners ask us about and, secondly, this understanding is needed for our comprehensive development. In order to understand what is going on around us, it is necessary to have this knowledge and competence. Therefore, the Advanced Courses are aimed primarily at actualizing the knowledge our students already have’, the CMI rector said, adding, ‘For you as heads of diocesan departments for cooperation with the Cossacks we have prepared an intensive course to introduce you to various spheres of church work and broaden your horizon’.

Metropolitan Hilarion underscored that the work with the Cossacks in our days is one of the priority areas of church life. ‘And our state authorities, too, give it considerable attention’, he added.

The CMI rector greeted the chairman of the Synodal Committee for Cooperation with the Cossacks, Metropolitan Kirill of Stavropol and Nevinnomysk, and the executive secretary of the Presidential Council for the Affairs of the Cossacks, Mr. N. Konstantinov. After that a Cooperation Agreement was signed between the CMI and the Synodal Department for Cooperation with the Cossacks. Then Metropolitan Kirill spoke about the work his department carried out with metropolias and dioceses. He stressed in particular that the Cossacks had always been defenders of Orthodoxy, and in our days the state and the Church set their hopes on them. Mr. Konstantinov spoke about the cooperation between the state and the Cossacks.

The first reference to the Cossacks in Russian history, he said, was made in 1444, and already in 1576 Tsar Ivan the Terrible and the Don Cossacks signed an agreement on the border protection. At present, cooperation between the state and the Cossacks is carried out on the basis of ‘The Strategy of the State Policy Towards the Russian Cossacks’. In 2009, a Presidential Council for the Affairs of the Cossacks was established, with Mr. A. Beglov as its chairman.

The first day of the studies continued with lectures on key aspects of the diocesan cooperation with Cossacks’ military units and other Cossack organizations, as well as on inter-cultural communication and the 70th anniversary of the Victory in the Great Patriotic War. 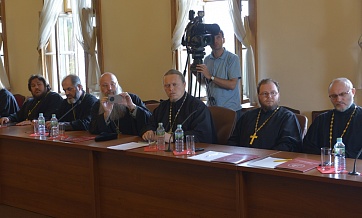 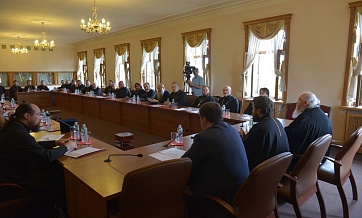 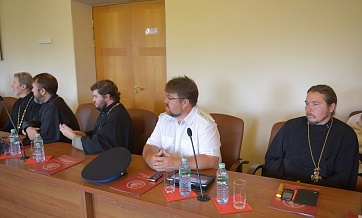 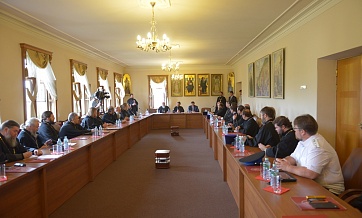