Metropolitan Hilarion gives his blessing to post-graduate students for new academic year and presents the first ever D.D. certificate recognized by the Russian state today

Metropolitan Hilarion gives his blessing to post-graduate students for new academic year and presents the first ever D.D. certificate recognized by the Russian state today 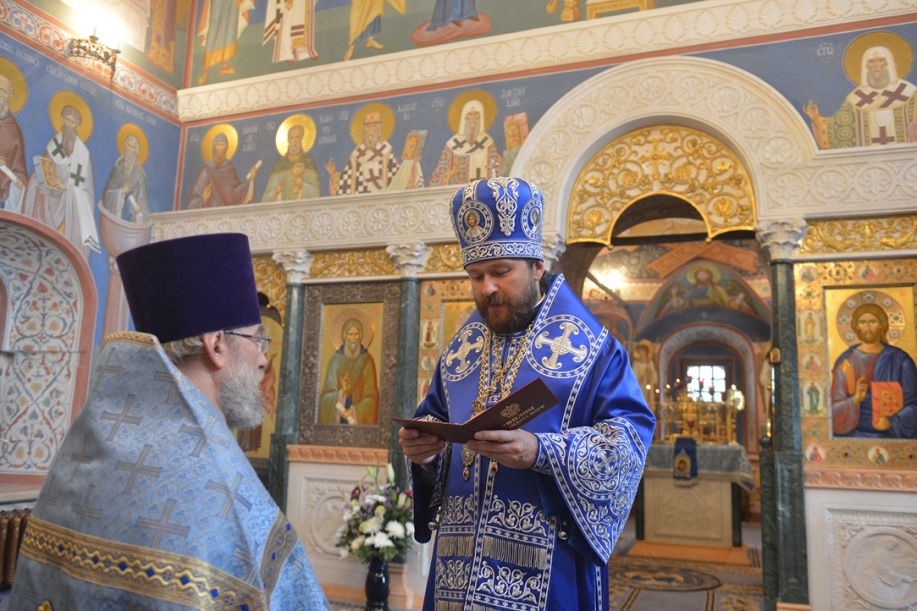 September 3, 2017 – Metropolitan Hilarion of Volokolamsk, head of the Moscow Patriarchate department for external church relations (DECR) and rector of the Ss Cyril and Methodius Institute of Post-graduate Studies (CMI), celebrated the Divine Liturgy at the church of the Beheading of St. John the Baptist at the Patriarchal Methochion of the Holy Brothers of Chernigov.

The archpastor was assisted by Archimandrite Seraphim (Shemyatovsky), representative of the Orthodox Church of the Czech Lands and Slovenia to the Patriarch of Moscow and All Russia; Archimandrite Philaret (Bulekov), DECR vice-chairman and head of the CMI chair of external church relations and social sciences; Archimandrite Sergiy (Akimov), head of the CMI chair of Bible studies and rector of Minsk Theological Academy; Hegumen Serapion (Mitko), deputy head of the synodal mission department; Hieromonk Ioann (Kopeikin), CMI pro-rector for training; Archpriest Pavel Khondzinsky, dean of the St. Tiknon Orthodox University of the Humanities faculty of theology; Rev. Dimitry Safonov, secretary of the CMI academic council; Rev. Mikhail Memnonov, CMI inspector, and the clergy of the church.

After the Prayer of Fervent Supplication His Eminence lifted up a prayer for peace in Ukraine.

Then he prayed for the repose of the soul of the deceased Russia’s Honoured Artist Dmitry Kogan.

After the liturgy Metropolitan Hilarion read a prayer for the commencement of the academic year and sprinkled the students with holy water.

Then His Eminence addressed himself to the congregation with an archpastoral homily:

‘I congratulate all of you, dear fathers, brothers and sisters, on the Sunday and the commencement of an academic year in the Ss Cyril and Methodius Institute of Post-graduate Studies.

‘During today’s service, for which the students and faculty of our theological school – professors, heads of chairs and first-year students – we all prayed that the Lord many grant us wisdom and intelligence and enlighten us with the light of His truth.

‘In the end of the liturgy a special prayer was lifted up for the students asking among other things that the Lord may preserved them in the Orthodox faith; for the most important thing on which the system of knowledge in based in our Church is the holy Orthodox faith, it is Holy Scriptures and the Holy Tradition – the foundation on which the edifice of church theological education is built.

‘In the beginning of September we think about what awaits us in a new academic year, and every time when we enter it we understand that this year is to bring new knowledge to us. And not just knowledge, which will be of use in our life, but also the knowledge that will nourish us spiritually. Because, a theological school unlike a secular one is a place where we offer not only professional training for narrow background specialists, be they priests, deacons or theological academics, but we also educate those who are called by the Lord to His Heavenly Kingdom so that they could be prepared for this Kingdom. And the whole system of our theological education is aimed exactly to what Holy Fathers’ described as obrazovanie (education) derived from the word obraz (image) because every one of us is created in the image and likeness of God.

‘The education process in theological schools is like the process of restoration of an old icon. When an icon, an image, is brought to a workshop, the restoration master knows that hidden under the layer of soot and perhaps under various later layers of paints is the original icon that had been painted on that board. And now very slowly, very carefully he should remove those layers, first that of soot and then that of later paintings, which appeared on the board in their time, in order to reveal the original image. The Lord has created us in His image, but this image in us is very often proves to be darkened, and through prayer, participation in church Sacraments and through the teaching of wisdom contained in Holy Scripture and the Holy Tradition, this God’s image is being restored and renewed in us. Then the image opens up in all its original beauty, such as God has created it.

‘And it is not accidental that in a church school the education process is not limited to people’s coming, sitting at desks, reading some books, writing compositions, passing exams. All this is important and necessary because we should receive knowledge and there should be an examination system. All this exists in every school. But what is it that distinguishes a church school from a secular one? – It is that the education system here is indissolubly bound up with the Church’s liturgical life. And every time when we come to a church of God, we are aware of being not just professors and students but those who are called by the Lord to apostolic ministry.

‘This ministry is not always directly connected with the Sacrament of priesthood. Even a person not in a holy order can be an apostle or preacher but aslo, for instance, a holder of an academic degree in theology engaged in teaching or writing books and articles or making his own contribution to the apostolic mission that the Lord has placed on the Church from the very beginning. And the Lord calls us to become aware of this mission.

‘Today we heard the Lord’s parable about the wicked tenents. There was a master of a house who planted a vineyard and put a fence around it, and dug a winepress in it and built a tower and leased it to tenants, and went away. When the season for fruit drew near, he sent his servants to the tenants to get his fruit. And the tenants took his servants and beat one, killed another, and stoned another. Again he sent other servants, more than the first. And they did the same to them… They even killed a son of the master of the vineyard. And in the end of the parable the Lord asks: ‘When therefore the owner of the vineyard comes, what will he do to those tenants?’ They said to Him, ‘He will put those wretches to a miserable death and let out the vineyard to other tenants who will give him the fruits in their seasons’ (Mt. 21:40-41).

‘It is exactly what happened to those representatives of the people of Israel to whom the Lord sent His prophets for centuries and promised that the Messiah, the Saviour, would come. But when the Saviour did come they failed to discern Him, to hear the voice of God addressing them; they crucified the Saviour of the world. And then the Lord gave His vineyard to other tenants.

‘We are really the other tenants to whom the Lord has given His vineyard – the New Israel, His Holy Church. But the Lord indeed expects fruits from us as well. What are these fruits? First of all, these are faith, steadfast commitment to Orthodoxy, unwavering wish to always learn to read the Gospel and to seek the knowledge of God’s truth through Holy Scriptures and the Church Traditions. It is the readiness to dedicate one’s life and resources to the preaching of the Gospel of Christ. These are the fruits that the Lord expects from us, and He Himself helps us in our preparation for this apostolic mission, also in the walls of our school.

‘I would like to wish that studies may be for us a way of growing towards the Heavenly Kingdom. Not only those who are taught but also those who teach should study. Poor is a one who teach himself is not taught. Poor is a professor who wrote some works in his youth and then decided that he could live on his old baggage. It is not accidental that there is a system of attestation and re-attestation as it is necessary for keeping those who teach, too, in the continued process of learning, enrichment with knowledge and growth.

I wish you that this process may never end for each of us, that we may daily learn something new, that every day may be filled with discoveries for us, so that life may always be meaningful, interesting and informed and so that the Lord Himself may be our guide on our way to the Heavenly Kingdom’.

The homily was followed by the presentation of the first ever D.D. certificate recognized in Russia today by the state.

On June 1, 2017, the United Dissertation Council – established by the Ministry of Education and Science on the basis of the Ss Cyril and Methodius Institute of Post-graduate Studies, the St. Tikhon Orthodox University of the Humanities, Moscow State University and Presidential Academy of Economy and Public Service – heard the first defense of a thesis on Specialty 26.00.01 – ‘Theology’ on the theme ‘Solution of Problems of the 18th Century Theology in the Synthesis by St. Philaret the Metropolitan of Moscow’. The Dissertation Council resolved that Archpriest Pavel Khondzinsky be granted the academic degree of Doctor of Theology.

Presenting the certificate, Metropolitan Hilarion stressed, ‘We had covered a very long way before this became possible because for long years Soviet scientists insisted that theology is not a science at all because generally a one who believes in God cannot be regarded as a scientist. This is what some biologists keep saying today too. They tried to disrupt the first defense of a thesis on theology. But the Lord has not hearken to their wails; rather He heard our prayers. And the state in the person of the Ministry of Education and Science showed calm, self-possession and wisdom. Today I am glad to present this first ever certificate to Archpriest Pavel Khodzinsky who have been granted the degree for his dissertation devoted to St. Philaret of Moscow’.

Father Pavel thanked Metropolitan Hilarion for presenting the certificate, saying, ‘I very much hope that this event has drawn a line under the stormy history of my defense and initiate a new one – a history of fully-fledged development of the theological science in the common space of the humanities’. 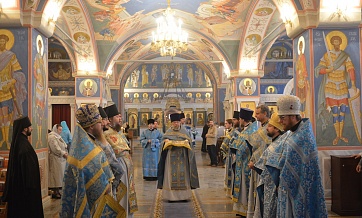 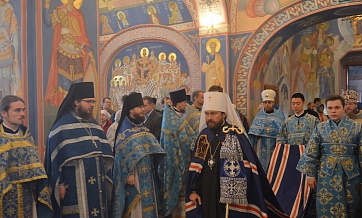 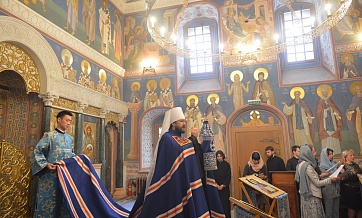 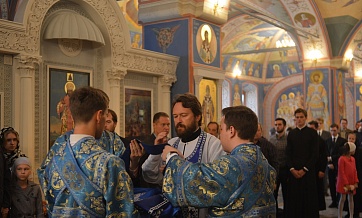 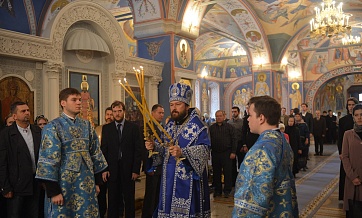 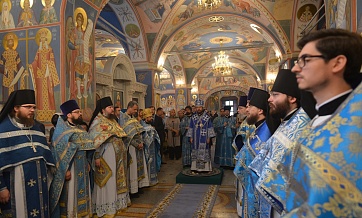 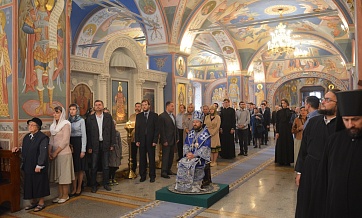 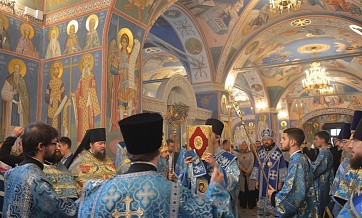 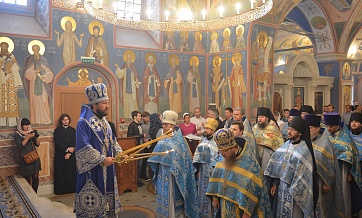 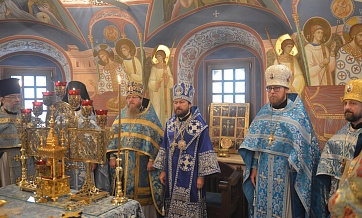 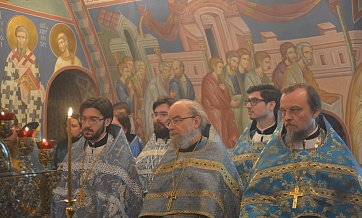 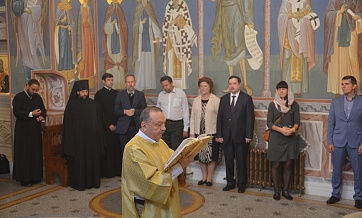 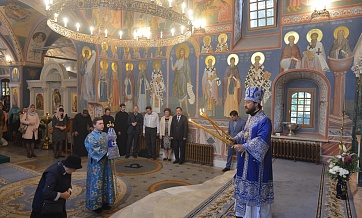 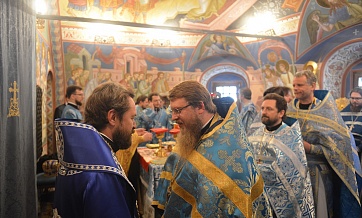 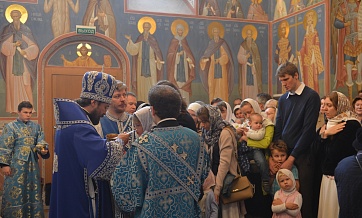 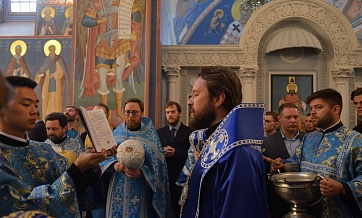 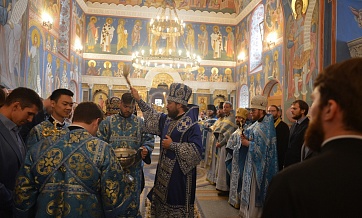 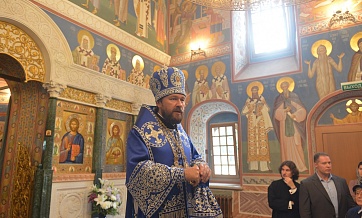 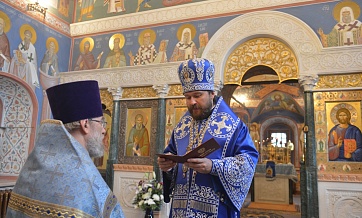 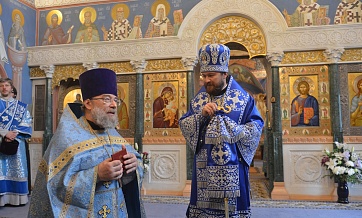