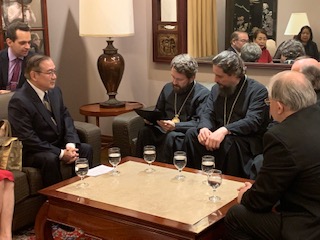 On August 8, 2019, Metropolitan Hilarion of Volokolamsk, head of the Moscow Patriarchate department for external church relations (DECR), with a blessing of His Holiness Patriarch Kirill of Moscow and All Russia, arrived in the Philippines.
At the Manila airport, the DECR chairman was met by Metropolitan Sergiy of Singapore and South-East Asia, Patriarchal Exarch for South-East Asia, Mr. I. Khovaev, Russia’s ambassador to the Republic of the Philippines, Metropolitan Pavel of Khanty-Mansi and Surgut, acting administrator of the dioceses of the Philippines and Vietnam of the Patriarchal Exarchate of South-East Asia, Mr. D. Karenin, second secretary of the Russian embassy in Manila, and Hieromonk Pitirim (Dondenko), secretary of the Exarchate.

On the same day, Metropolitan Hilarion had a meeting with Secretary for Foreign Affairs Teodoro Locsin.

They discussed a wide range of issues concerning the revival of the Russian Orthodox Church’s presence in the Philippines and pastoral care of the faithful due to the establishment of the Patriarchal Exarchate of South-East Asia and the diocese of the Philippines and Vietnam as its part. They also dealt with the restoration of the Church of Our Lady of Iveron, which existed from 1934-1954 in Manila and the development of the Moscow Patriarchate communities in Mindanao Island.

Participating in the meeting were also Metropolitan Sergiy of Singapore and South-East Asia, Ambassador I. Khovaev, Metropolitan Pavel of Khanty-Mansi and Surgut, Mr. D. Karenin, and Hieromonk Pitirim. 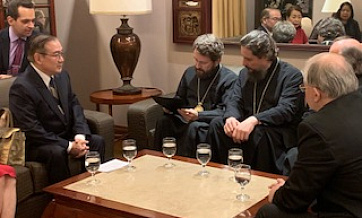 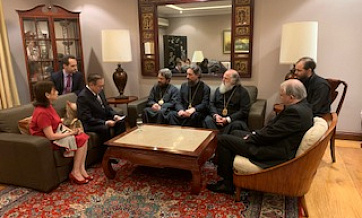