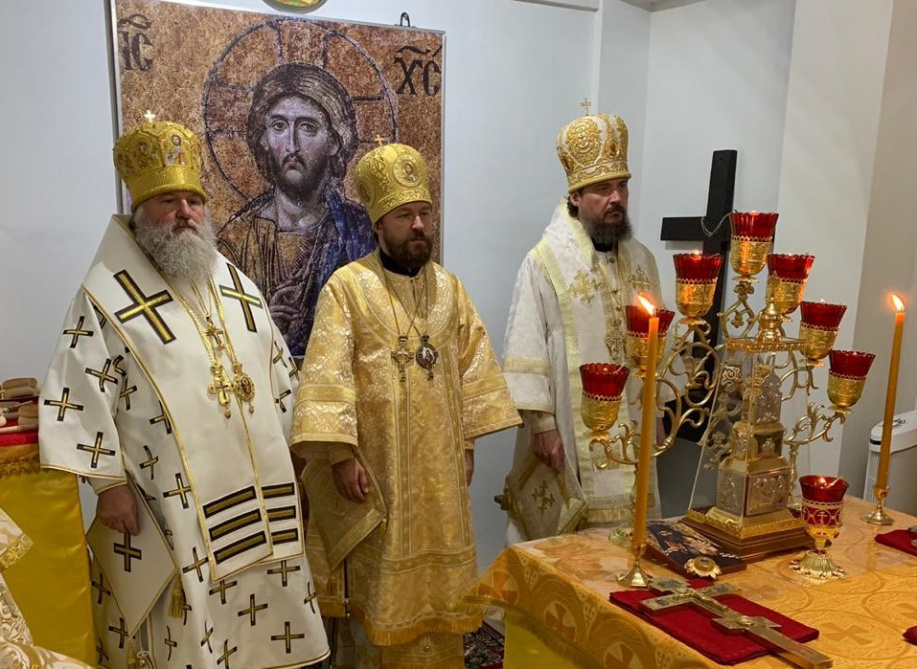 On 10th August 2019, Metropolitan Hilarion of Volokolamsk, chairman of the Moscow Patriarchate’s Department for External Church Relations, while on a working visit to the Philippines, in concelebration with Metropolitan Sergy of Singapore and Southeast Asia, Patriarchal Exarch of Southeast Asia, and Metropolitan Pavel of Khanty-Mansiysk and Surgut, acting administrator of the diocese of the Philippines and Vietnam, celebrated the Divine Liturgy at the Church of the Nativity of Christ in the city of Tagaytay.
Concelebrating with the hierarchs were Priest David Grubbs, rector of the parish; Hieromonk Nikolai (Ono), cleric of the Russian Orthodox Church’s Metochion in Tokyo; clerics of the dioceses of the Patriarchal Exarchate of Southeast Asia: Hieromonk Pitirim (Dondenko), Priest Silouan Thompson, Hieromonk Antony (Kirpichev), Hieromonk Alexy (Lapshin), Hieromonk Vikenty (Romanyuk), Hieromonk Kornily (Molev), Priest Joachim Gonzales, Hierodeacon Yuvenaly (Lapshin), Deacon Roman Buniel, Deacon Moses Cahilig; as well as Hieromonk Philip (Balingit), cleric of the Russian Orthodox Church Outside of Russia.

Among those praying at the Liturgy were Mr. Igor Khovayev, Ambassador Extraordinary and Plenipotentiary of the Russian Federation to the Republic of the Philippines; representatives of the diplomatic corps; and numerous parishioners.

The divine service was celebrated in the Church Slavonic, English and Tagalong languages.

After the Divine Liturgy Metropolitan Sergy warmly greeted Metropolitan Hilarion, as well as Metropolitan Pavel, for whom it was the first divine service in the Philippine land.

Metropolitan Hilarion of Volokolamsk conveyed to all those present blessings from His Holiness Patriarch Kirill of Moscow and All Russia, noting that His Holiness holds in his heart and in his prayer the Philippine flock and the entire flock of Southeast Asia.

Addressing the worshippers, the DECR chairman said, in particular:

“I am very glad that I have the opportunity to visit this church, to pray with you and to partake of the Holy Mysteries of Christ, because the communion of the Holy Mysteries Christ is the core of our Christian life. Christ Himself nourishes us with His Body and His Blood. Through communion we are united with God in spirit and in body. And I would like to wish all of you to be firm in preserving the holy Orthodox faith.

“Yesterday I spoke at a stadium before the audience of 30 thousand young people, and after I concluded my address, an American Protestant pastor who was in charge of the event said that the Orthodox Church is the Church which was founded by the Lord Jesus Christ and appeared even before the Catholic Church and the Protestant church.

“It does not matter to us who appeared earlier. What matters to us is that our Holy Church preserved the teaching given by our Lord Jesus Christ to His disciples, and that the same Mystical Supper which our Lord Jesus Christ celebrated with His own hands is being celebrated by Him in our churches today: priests break bread and give the Body and Blood of Christ to believers, but they do it not by their own power, but by the power of God. For this reason our Church exists on earth – not only to preach Christ, but to give Christ to people to eat.”

The DECR chairman thanked Metropolitan Sergy for his labours in the Philippines and in the entire region of Southeast Asia.

“When you came to this country, there were no parishes of the Russian Orthodox Church here, and now there are at least 30 of them,” Metropolitan Hilarion said, “Among the parishioners of your churches are the Russians, Ukrainians, Filipinos and representatives of other nationalities. Thanks to your work and the work of your assistants our church community is thriving. With great spiritual joy I have celebrated the Divine Liturgy with you today and prayed with your flock.”

On behalf of His Holiness Patriarch Kirill of Moscow and All Russia the DECR chairman presented Ambassador Igor Khovayev with the Medal in Honour of the Millennium of the Holy Demise of the Holy Prince Vladimir, Equal-to-the-Apostles, in consideration of his manifold assistance and support rendered to the Russian Orthodox Church in the Philippines.