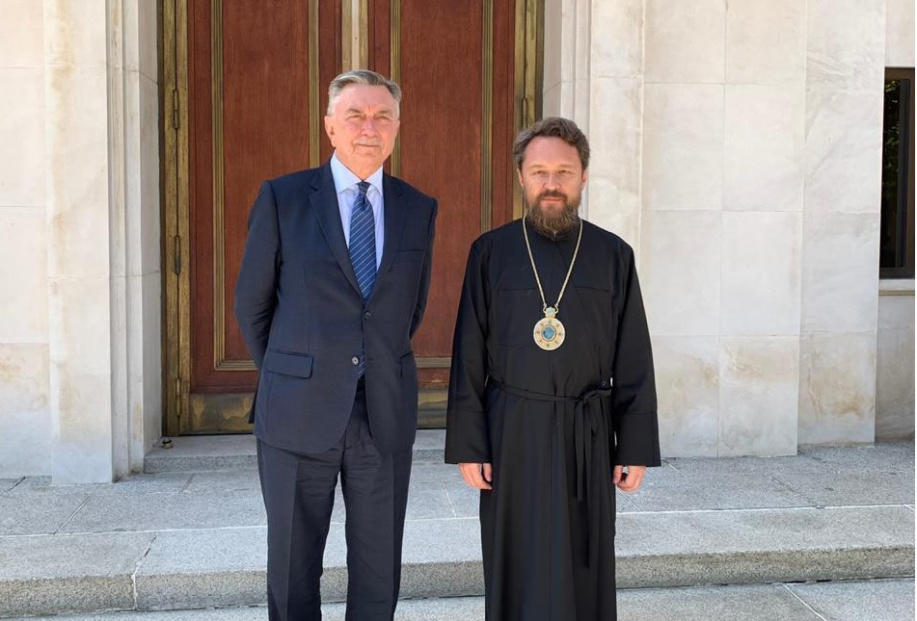 On September 17, 2019, Metropolitan Hilarion of Volokolamsk, head of the Moscow Patriarchate department for external church relations (DECR), who is on a visit to Spain with a blessing of His Holiness Patriarch Kirill of Moscow and All Russia, visited the Russian embassy in Madrid to meet with Russian Federation ambassador to the Kingdom of Spain Yu. P. Korchagin.
They discussed the Russian Orthodox Church’s pastoral care for compatriots in Spain and other issues of mutual concern.

They were joined in their talk by Archbishop Nestor of Madrid and Lisbon, Archpriest Andrey Kordochkin, secretary of the diocese of Madrid and ecclesiarch of the church of St. Mary Magdalene Equal-to-the-Apostles, Mr. D. Sokolov, first secretary of the Russian embassy in Spain; Hieromonk Stephan (Igumnov), DECR secretary for inter-Christian relations; Mr. A. Korchagin, counsellor of the embassy; and Subdeacon V. Li.

After the talk, the Russian Federation ambassador gave a dinner in honour of Metropolitan Hilarion.