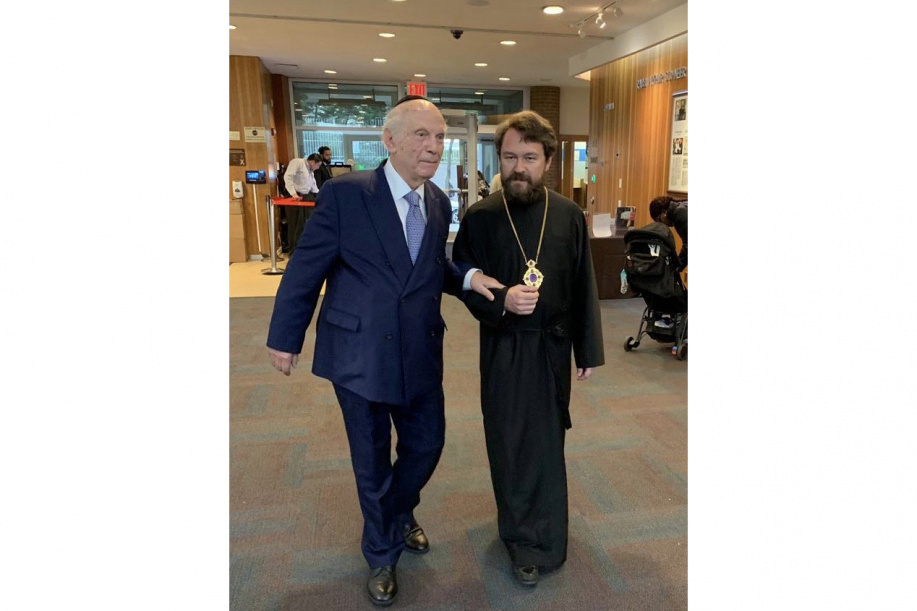 On October 25, 2019, Metropolitan Hilarion of Volokolamsk, head of the Moscow Patriarchate department for external church relations (DECR), met in New York with President of the Appeal of Conscience foundation Rabbi Arthur Schneier in this study at Park East Synagogue.
During the talk, which was held in a warn and cordial atmosphere, Metropolitan Hilarion told his interlocutor about interreligious contacts of the Russian Orthodox Church today and the work of the Interreligious Council in Russia, of which Patriarch Kirill of Moscow and All Russia is a honorary chairman.

In his turn, Rabbi Arthur Schneier, who will be 90 next March, shared his memories about numerous meetings with hierarchs of the Russian Orthodox Church and the visit made by Patriarch Alexy II of eternal memory to Park East Synagogue in 1999.

They discussed a number of other matters of mutual concern and those related to interreligious cooperation.

In conclusion of the talk they exchange tokens of the meeting.

Arthur Schneier was born on March 20, 1930. He was a victim of the fascist persecution during World War II. He survived the Budapest ghetto. In 1947, he moved to the USA. Since 1962 he has been the chief rabbi of Park East Synagogue in New York.

In 1965, he established and came at the head of the interreligious foundation ‘Appeal of Conscience’ with its priority area of work being interreligious dialogue.

Rabbi Arthur Schneier is honorary chairman of the World Jewish Congress. President B. Clinton awarded him the Presidential Citizens Medal, the US second important civic award.

Rabbi Schneier visited the USSR in the 1960s-1980s. In June 1982, he met with Patriarch Pimen during his trip to the USA. On January 18, 1990, a delegation of rabbis headed by him was received by the DECR chairman Metropolitan Kirill. In 1991, Arthur Schneier initiated a meeting between Patriarch Alexy II and a group of rabbis and other representatives of the Jewish community in the USA (New York). During the visit made by Patriarch Alexy II to the USA in 1993, Arthur Schneier presented him with the Appeal of Conscience award.

In November 2000, Metropolitan Kirill of Smolensk and Kaliningrad, during his trip to the USA, had a meeting with Rabbi Schneier. On February 22, 2002, Patriarch Alexy II received Arthur Schneier in audience in Moscow. They discussed the peacemaking work of religious communities and inter-confessional dialogue.

Patriarch Alexy II, during their meeting on May 9, 2005, awarded Rabbi Schneier the Order of the Holy Prince Daniel of Moscow. On July 3-5, 2006, Arthur Schneier attended the World Summit of Religious Leaders in Moscow.

On February 3, 2009, Arthur Schneier was received in audience by Patriarch Kirill.

On September 25, 2015, festive events took place in the USA devoted to Rabbi Shneier’s 85th birthday and the 50th anniversary of the Appeal of Conscience Foundation, which were attended by Bishop Ioann of Naro-Fominsk, administrator of the Patriarchal Parishes in the USA.

On November 21 of the same year, Arthur Schneier met with Patriarch Kirill at the St, Daniel residence.