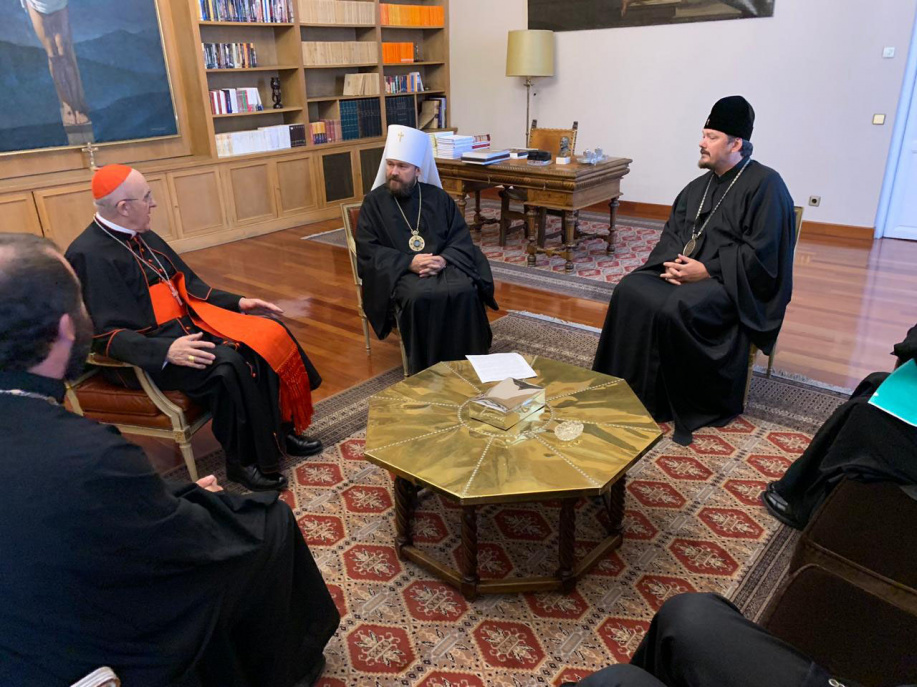 On September 17, 2019, Metropolitan Hilarion of Volokolamsk, head of the Moscow Patriarchate department for extern church relations (DECR), who is on a visit to Spain with a blessing of His Holiness Patriarch Kirill of Moscow and All Russia, met with Cardinal Carlos Osoro Sierra, Archbishop of Madrid.
Present at the meeting, which took place at the Archbishop’s Palace in Madrid, were also Archbishop Nestor of Madrid and Lisbon; Archpriest Andrey Andrey Kordochkin, secretary of the diocese of Madrid and ecclesiarch of the church of St. Mary Magdalene Equal-to-the-Apostles; Hieromonk Stephan (Igumnov), DECR secretary for inter-Christian relations; Prof A. Riccardi, secretary of Sant’Egidio Community; and Subdeacon V. Li.

Cardinal Osoro Sierra asked the metropolitan to convey special greetings to His Holiness Kirill, Patriarch of Moscow and All Russia, saying that he admired the Primate of the Russian Orthodox Church.

The sides discussed the current state of relations between the Russian Orthodox Church and the Roman Catholic Church.

Metropolitan Hilarion recalled the important event which took place in the last years in the bilateral relations and which gave a considerable impetus to them – the meeting between Pope Francis of Rome and Patriarch Kirill in Havana. The Pope and the Patriarch signed a Joint Declaration touching upon the basic topics of the bilateral dialogue, which opened a new page in its history. Among the important events, His Eminence Hilarion said, was also the bringing of a part of the relics of St. Nicholas the Wonderworker to Russia. The Havana meeting also dealt with the need for supporting Christians who are subjected to persecution in various regions in the world. After that, the Russian Orthodox Church and the Roman Catholic Church worked out a number of joint initiatives in support for suffering Christians in Syria and other countries of the Middle East. As Metropolitan Hilarion stressed, some of these initiatives are implemented together with the Catholic Kirche in Not foundation.

In conclusion, Metropolitan Hilarion thanked Cardinal Osoro Sierra for his good attitude to the Russian Orthodox Church parishes in Spain. The cardinal, on his part, pointed to the good cooperation developed between him and Archbishop Nestor of Madrid and Lisbon. 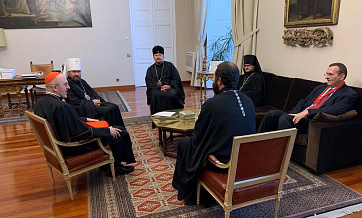 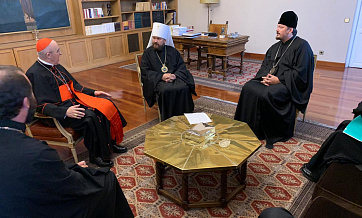