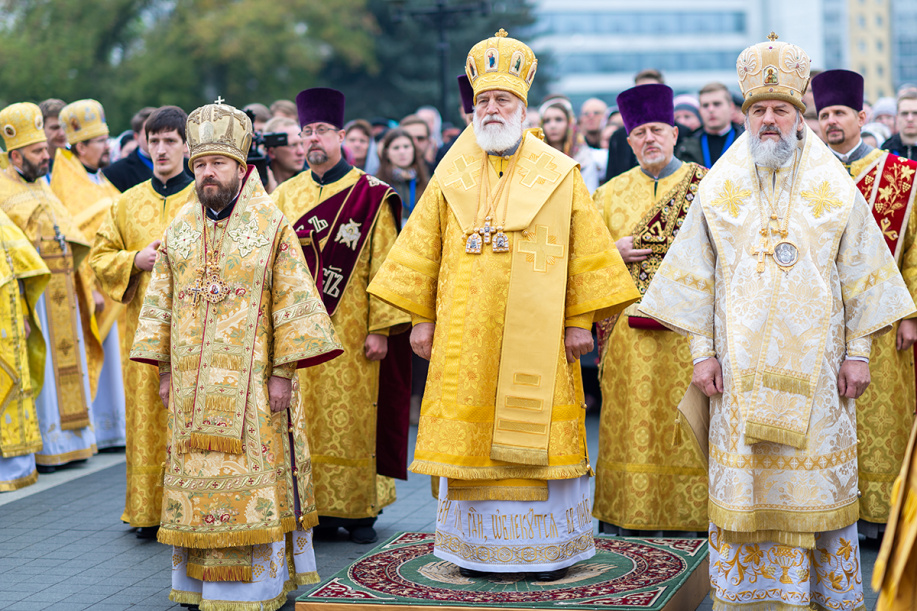 On 29th September 2019, the celebrations on the occasion of the 30th anniversary of the establishment of the Belarusian Exarchate of the Moscow Patriarchate were held in Minsk.

Celebrating the Divine Liturgy in the square in front of the Cathedral of the Holy Spirit in Minsk were Metropolitan Pavel of Minsk and Zaslavsk, Patriarchal Exarch of All Belarus; Metropolitan Hilarion of Volokolamsk, chairman of the Moscow Patriarchate’s Department for External Church Relations; Metropolitan Innocent of Vilnius and Lithuania; Metropolitan Avgustin of Belaya Tserkov and Boguslav; Archbishop Dimitry of Vitebsk and Orsha; Archbishop Stefan of Pinsk and Luninetsk; Archbishop Artemy of Grodno and Volkovysk; Archbishop Gury of Novogrudok and Slonim; Archbishop Stefan of Gomel and Zhlobin; Archbishop Paisjusz of Przemyśl and Gorlice (Polish Orthodox Church); Bishop Serafim of Bobruysk and Bykhov; Bishop Leonid of Turov and Mozyr; Bishop Veniamin of Borisov and Maryina Gorka; Bishop Pavel of Molodechno and Stolbtsy; Bishop Antony of Slutsk and Soligorsk; Bishop Ignaty of Polotsk and Glubokoye. Concelebrating with the archpastors were Archimandrite Amvrosy (Shevtsov), Bishop elect of Svetlogorsk, vicar of the Gomel diocese; clergy of the Belarusian Orthodox Church; and ordained guests.

That same day a photo exhibition entitled “Belarusian Exarchate: 30 years of History” opened in the Minsk Theological Academy. Among those who attended the opening ceremony were Metropolitan Pavel of Minsk and Zaslavl, Metropolitan Hilarion of Volokolamsk, Metropolitan Innocent of Vilnius and Lithuania, Metropolitan Avgustin of Belaya Tserkov and Boguslav, as well as Mr. Dmitry Mezentsev, Ambassador Extraordinary and Plenipotentiary of the Russian Federation to the Republic of Belarus.

During a repast that followed the opening ceremony the DECR chairman addressed all those present, saying in particular:

“Byelorussia was one of the Republics of the Soviet Union that suffered greatly under the pressure of atheistic persecutions. A goal was set to destroy religion completely in Byelorussia, to make it a fully atheistic krai. However, when Metropolitan Philaret was appointed to serve here, the situation began to change. Of course, it began to change especially after the Millennium of the Baptism of Russia and after the establishment of the Exarchate, which gave an opportunity to take a fresh look at the religious situation in Byelorussia. That moment marked the beginning of true revival of church life in the Byelorussian land. From a diocese headed by one hierarch the Belarusian Church grew into the Exarchate with its own Holy Synod, the Exarchate which carries out missionary and charitable work, social projects and ministry among young people, which actively interacts with secular authorities and promotes contacts with other Christian confessions.”

In the evening the grand meeting on the occasion of the 30th anniversary of the establishment of the Belarusian Exarchate and a concert took place in Minsk.

In the beginning of the grand meeting, Metropolitan Hilarion of Volokolamsk read out a message of greetings from His Holiness Patriarch Kirill of Moscow and All Russia. The message reads:

“Your Eminence, beloved in the Lord Metropolitan Pavel, archpastors and pastors, God-loving monks and nuns, dear brothers and sisters,
I cordially greet all of you with this memorable date – the 30th anniversary of the establishment of the Belarusian Exarchate of the Moscow Patriarchate.
This important decision was taken in 1989 by the Bishops’ Council of the Russian Orthodox Church, which marked the 400th anniversary of the establishment of the Patriarchate in Russia.
Over the past years considerable changes have occurred not only in the life of the Exarchate, but also in the life of the county. By the mercy of God, through joint efforts of the clergy and the flock, with the favourable attitude of secular authorities and the support of benefactors, in the lands of the White Rus’ churches and monasteries are being restored, new parishes are being opened, educational work and social ministry are being carried out, and the issues of theological education and upbringing of the rising generation are being successfully resolved.
It is gratifying to bear witness to the fact that the active development of church life has beneficial effect on our contemporaries, strengthening in society traditional moral values and intransient ideals of mercy, peace, goodness and justice.
Giving thanks to the All-Generous God for His paternal care for the Church of Belarus over the past years, we look towards the future with hope, knowing that His mercy is boundless and His love for mankind is the unfathomable abyss (cf. Moleben of Thanksgiving).
We ought to remain faithful to the ‘Prince of life’ (Acts 3:15), Christ the Saviour, to preserve the purity of faith, to keep guard over the Orthodox dogmas and canons, and to treasure our belonging to the One, Holy, Catholic and Apostolic Church.
Sharing the joy of these celebrations with all of you, I would like to call upon you to be guided in your life by the following exhortation of St. Paul: ‘Watch ye, stand fast in the faith, quit you like men, be strong. Let all your things be done with charity’ (1 Cor 16:13-14).
May Christ the Chief Pastor and Author of our salvation ‘bless his people with peace’ (Ps 29:11) and multiply the glory of the Holy Church which is ‘the pillar and ground of the truth’ (1 Tim 3:15).
I prayerfully wish to the Patriarchal Exarch of All Belarus, His Eminence Metropolitan Pavel, as well as to the hierarchs, clergy and flock the abundant mercies from the Lord in their further common work in the ecclesial field, in spiritual growth and in gaining Christians virtues, so that with brotherly love and like-mindedness they may lead a peaceful and quiet life ‘in all godliness and honesty’ (1 Tim 2:2).” 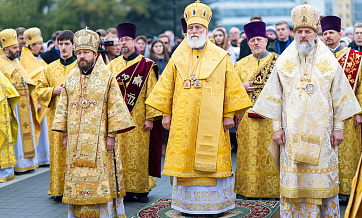 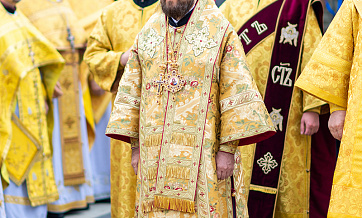 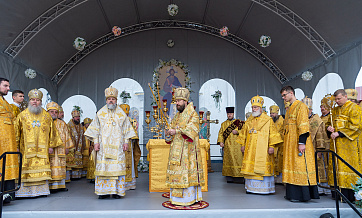 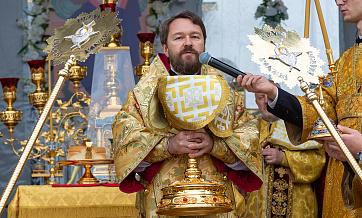 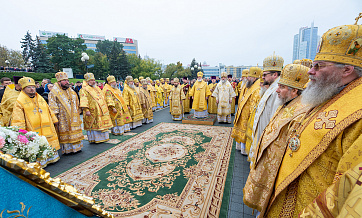 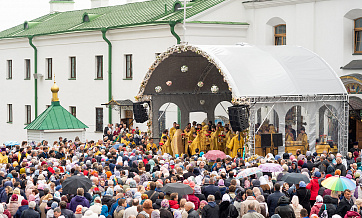 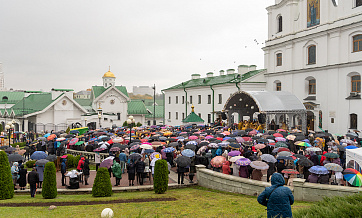 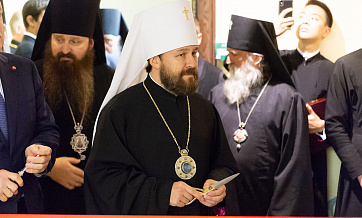 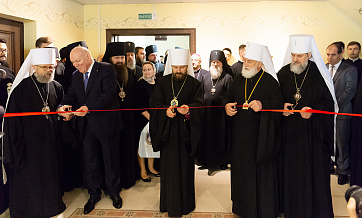 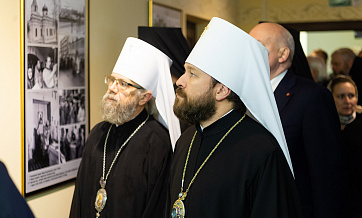 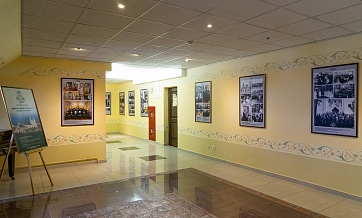 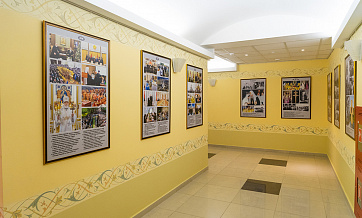 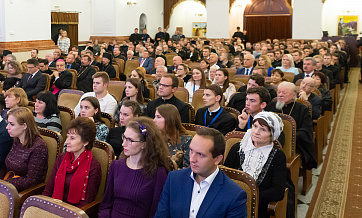 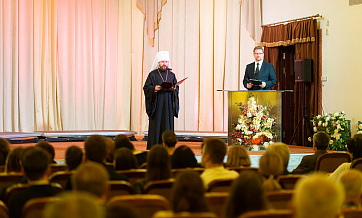 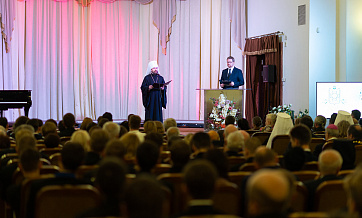